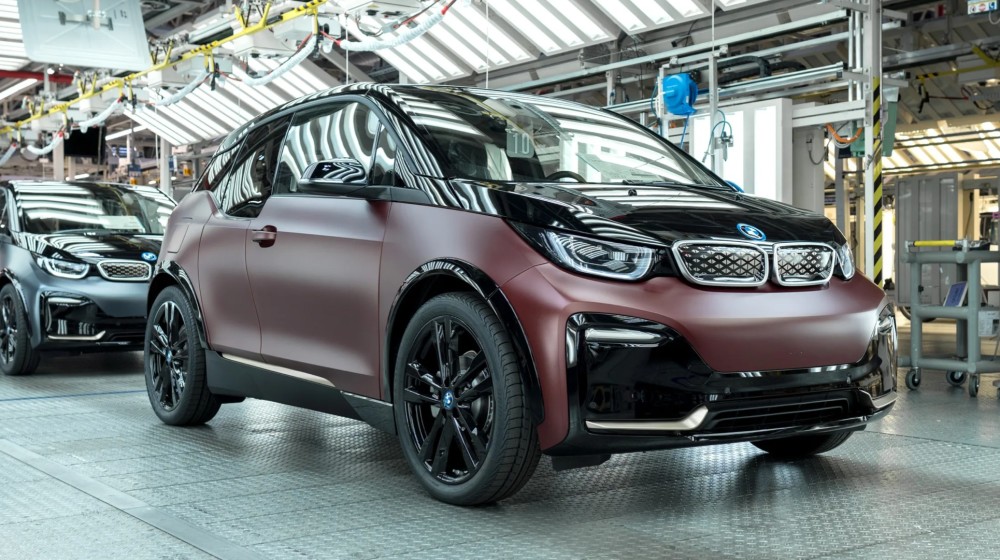 This week, the last batch of 18 i3 electric cars were delivered to customers at the BMW Museum in Munich. BMW created a special electroplating gold paint and black roof for these cars, giving the i3, an electric car born nearly 10 years ago, a rare sense of dignity. 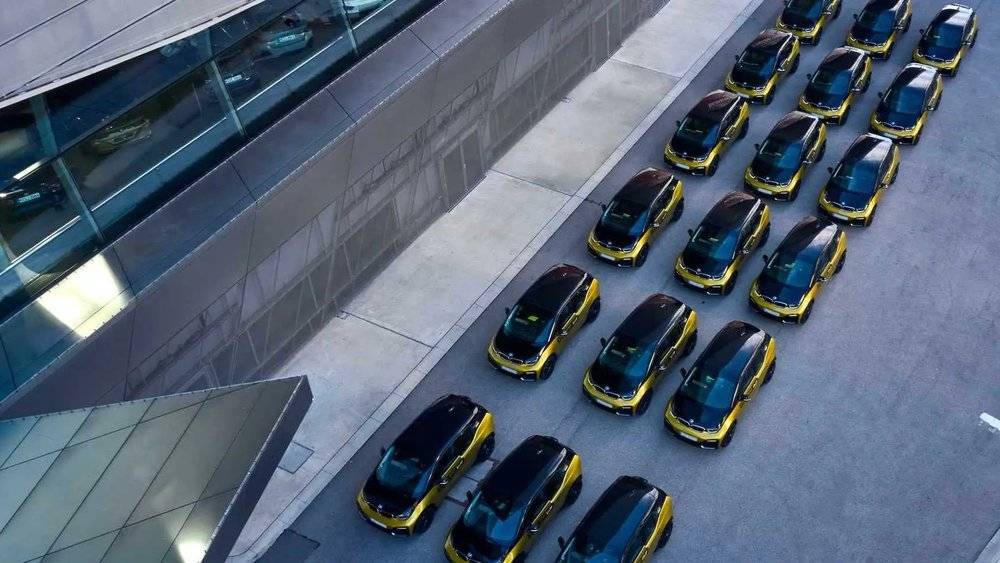 As BMW's future-oriented pioneer in the electric vehicle market, the i3 sold 250,000 units worldwide in the eight and a half years from its launch in 2013 to the end of production in July this year, with an average of less than 30,000 units a year. In the Chinese market, this figure is almost one-fifth of Tesla's Model 3 sales in China in 2021, and less than half of its peak one-month sales. Therefore, except in Beijing, Shanghai, Guangzhou and Shenzhen, we rarely see the i3.

Although it is a pioneer in the whole industry, almost no one can deny that the BMW i3's shape is still futuristic and technological attributes when it is placed in the line of smart electric vehicles. However, this model, which is almost the same as the Tesla Model S, did not make waves in the global auto market like the latter.

The pioneer who was expected to be a Tesla killer at first, has now officially become a martyr.

Although it went on sale at the end of 2013, the birth of the BMW i3 is somewhat ceremonial. In an article in Wired magazine, he described an afternoon in 2008 when Ulrich Kranz, the head of the BMW i-series project team, faced a long-term secrecy, and just now officially released a statement from the team:

“We’re going to build a sports car and an urban commuter car from scratch. The challenges don’t need to be repeated, I’m here to tell you: there will be sweat, tears, and even blood donations along the way.”

"Anyone who doesn't want to be involved can leave now."

Perhaps the gene of "iron and blood" that Chancellor Bismarck buried for the German nation took effect at this moment. The then-BMW EV executive, who has now joined the Apple Auto team, gave the team a very tragic mobilization. . Back then, the electric vehicle supply chain was a far cry from what it is today. Whether it is high-power fast charging or ternary lithium battery, there is no mature application record in the automotive field.

In fact, at that time, Ulrich Kranz could only refer to Tesla on the other side of the ocean. The company, which has looked unreliable for a long time, just delivered the RoaDSter, an electric sports car based on the body and chassis of the Lotus Elise sports car in the same year. The car features a carbon fiber body and an aluminum alloy frame, and is stuffed with 6,831 Panasonic 18650 batteries that used to be used in consumer electronics. At that time, the Tesla Roadster, with a 0-100 km/h acceleration of 4 seconds and a cruising range of 245 miles (about 394 kilometers), became a hot topic among the rich on the West Coast of the United States.

But from the perspective of traditional auto companies, both Tesla and Roadster are like the consistent "demon" results of Americans. At that time, everyone sprayed this car from too many angles, so that "the front cover needs to be opened to dissipate heat after driving for dozens of kilometers" is not the biggest slot point. 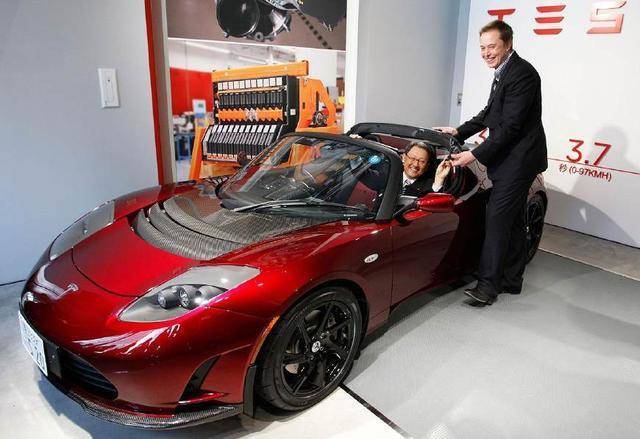 As shown in the picture, Mr. Musk did not have hair transplants at that time.

For how to build a future-oriented electric vehicle, Ulrich Kranz and his BMW technical team have a very "automotive" solution: weight reduction + changing the form of energy drive. At the body level, BMW established a record-breaking joint venture with SGL Group, the world's leading carbon fiber material manufacturer, and used CFRP (Carbon Fibre Reinforced Plastics, or carbon fiber composite materials) to build the entire frame and body material of the i3. The two parties have established a joint venture factory in Leipzig, which uses 173 robots to match adhesives and adopts a fully automated production method. The hardware of the entire production line plus R&D costs "up to billions of euros" is BMW's bet for the future. 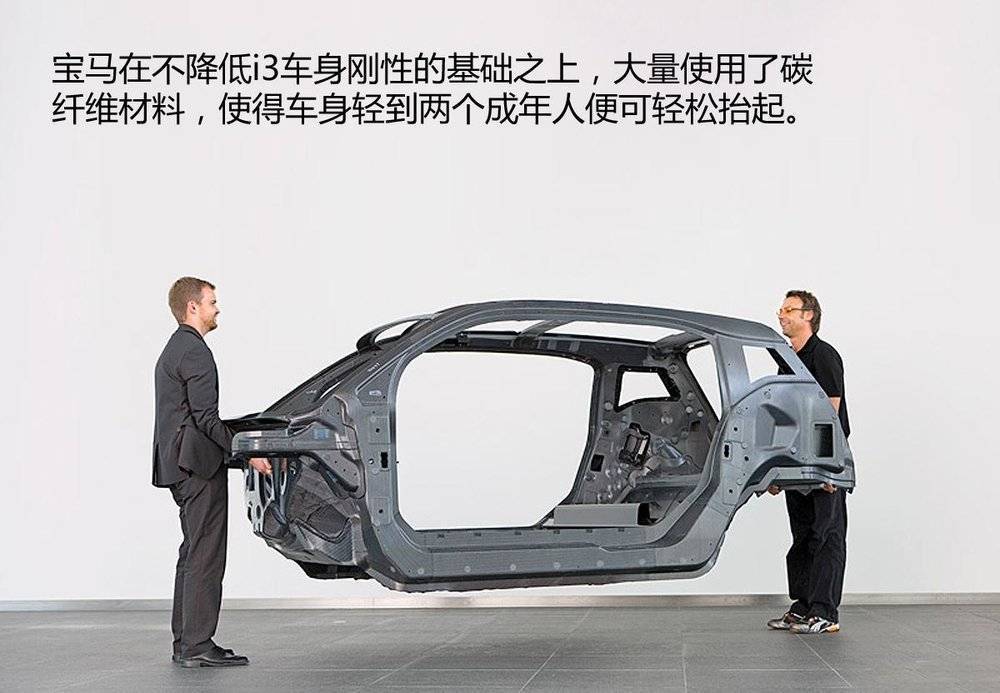 In terms of power, BMW equipped the i3 with a 22kWh battery, which could achieve 185 kilometers, which was already a great innovation at the time. Taking into account the lack of charging facilities at the time, whether in Europe, North America or the rest of the world, BMW also introduced a range extension version on the original i3 - the system consisted of a 0.647-liter twin-cylinder gasoline range extender and 8 The liter fuel tank can provide an additional 80-100 kilometers of cruising range for the vehicle. When the user's power is insufficient, this range extender, which makes the ideal ONE 1.5T three-cylinder engine look quite luxurious, can use the noise and vibration similar to a motorcycle to bring you back to reality from quiet electric driving.

At the beginning of its listing, the BMW i3 obviously had a higher brand appeal than Tesla in the market. In August 2014, the i3 sold 1,025 units in North America alone, nearly doubling the Tesla Model S. In the European market, the BMW i3 still completely crushed the Model S in various countries, and it was the same for a while.

But after a year, the BMW i3 was reduced to mediocrity, quickly becoming a marginalized "toy" model.

A setback for the i3, a serious miscalculation with BMW

Time entered 2015, under the triple attack of the cheaper Nissan LEAF, the GM VOLT and the full-capacity Model S, the i3 quickly fell out of the top three in North America. Although there are factors of market competition, as an ancient electric car, the BMW i3 also has its unreliable places. In 2017, BMW China recalled all i3s delivered in China from 2014 to 2016 due to "the hidden danger of the fuel tank ventilation pipe". The unreasonable arrangement of the fuel tank ventilation pipes of these vehicles may cause "positive fuel gas leakage after prolonged wear and tear, increasing the risk of vehicle fire."

Fortunately, the number of car owners affected by this wave of recalls in China is limited, with only 358 vehicles. In two years, enough for the BMW 3 Series to sell 400,000 units in China, and the total delivery of the i3 is less than the number of cars sold by a single 4S store in a year. There's no other reason: this car is just too down-to-earth.

When the i3 entered China in 2014, the guide price for the electric version of this car was as high as 449,800 yuan, and the extended-range version directly drove the price to 516,800 yuan, not including import tax and purchase tax—yes, until 2017 Only in 2009 did the BMW i3 enter the Ministry of Industry and Information Technology's "Catalogue of New Energy Vehicle Models Exempted from Vehicle Purchase Tax", enjoying preferential policies such as acquiring purchase tax and new energy vehicle license plates. In the United States, the i3 is priced from just $41,350, or about $253,000. 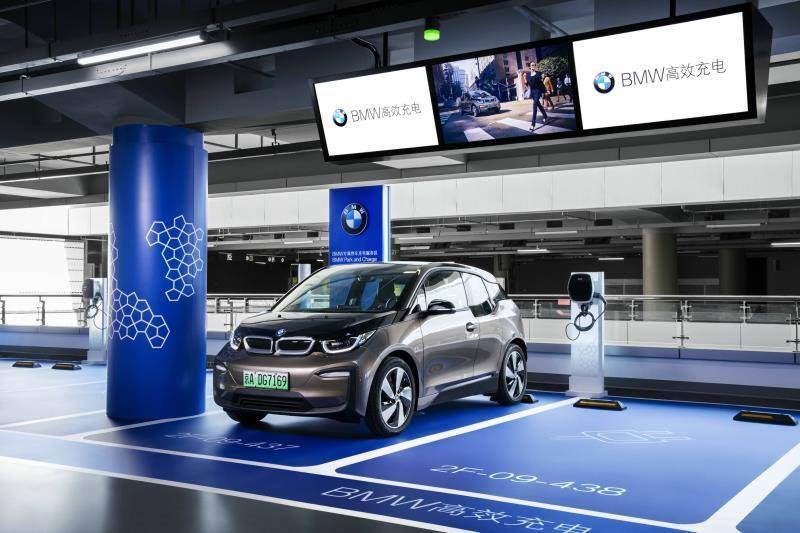 Even worse, the new BMW i3 did not support DC fast charging for a long time. As a result, users can only charge through household and shared AC charging piles, as well as "flying wires". Combined with the cruising range of just over 200 kilometers after the upgrade in 2017, the BMW i3 really does not have much market competitiveness. Therefore, for a long period of time, except for the old driver who shouted "rich man" after being seen on the road, this car has been a "mascot" in the Chinese market.

And when we look back at the i3 car in 2022, we can also feel the BMW Group's misjudgment of electric vehicles and even the wave of smart electric vehicles. First of all, BMW has not fully grasped the anxiety of users in China and most parts of the world about the cruising range. Therefore, the company did not equip the i3 with a fast charging mode from the beginning and built its own energy-replenishing network. It was not until 2019 that the BMW i3 was compatible with DC charging piles, and the "fast charging version" with a cruising range of 340 kilometers was long overdue. At that time, although the price of the i3 had been reduced to 339,800 yuan, users could already buy the model 3 for less than 300,000 yuan.

Second, R&D gets the focus wrong. Although in terms of appearance, interior and body design, the i3 has excellent design enough to be recorded in the history of automobile development, but this car is too focused on "urban commuting". The carbon fiber body + frame brings high maintenance costs. Although the design of the door is exquisite, it also increases the price of the vehicle. The unique production process also makes it impossible for this car to be locally produced outside of Germany, which has kept the price of the i3 at a high level for a long time. Just think: How rich are the Chinese people to spend 300,000 yuan to buy a small electric car with a length of over 4 meters, only to meet the needs of urban commuting?

The i3 without B-pillars has ample interior space. Image source: Autohome

The most important thing is that the i3 has no achievements in the field of intelligence. Despite its rather futuristic exterior and interior, the i3 lacks in smart cockpit and smart driving. The Tesla Model S delivered at the same time has been equipped with a completely different electrical and electronic architecture than traditional cars, and has left enough room for upgrades for higher-level intelligent driving functions. But whether it is the i3 with an initial price of 500,000 yuan in China, or its big brother i8 with a guide price of nearly 2 million, lane keeping and adaptive cruise are not available. It can be said that what BMW has achieved on the i3 is the accumulation of experience in body craftsmanship, manufacturing and materials. For high-voltage fast charging, intelligent driving, etc., it seems that it has not been considered at the beginning.

Therefore, after BMW discontinued the i8 and i3 successively, the idea of electric sports cars and electric city minicars has basically been discontinued. The group's new generation of electric vehicle products, such as iX3, i3, i7 and iX, are more based on the level of existing fuel vehicle products. Having lost their strong futuristic feel, these models became more mass-market and, as a result, sold better.

write at the end

Although there are many slots in product pricing and model positioning, this does not prevent the i3, which has been drifting away from us, from being good-looking and also a good car to drive.

In Tiger Sniff, where the author is located, a colleague bought a BMW i3 in 2019. This eldest brother, who lives in the core urban area of Tianjin and frequently needs to take his children to and from school through the sheep intestines trail in the city, was attracted by the BMW i3 displayed in the store during the process of ordering the MINI Cooper, and finally used a fuel vehicle indicator to put this. A car costing less than 270,000 yuan was brought home.

Talking about this car, my colleague's tone was obviously joyful. "Smart", "easy to drive", "full carbon body", "extremely light" and "accurate battery life" are the keywords he gave to this car. "On weekends, my wife and I will rush to drive this car." It reflects his family's love for this car.

Maybe there are always such a few cars in the world that can make people who drive it smile knowingly when they meet, and secretly recall the vivid and bright side of the past that accompanied that car.

That's the case with the MINI, and maybe the i3 too.

Next：The carriage turned into a big living person, and the Tesla "ghost" car was blinded again! 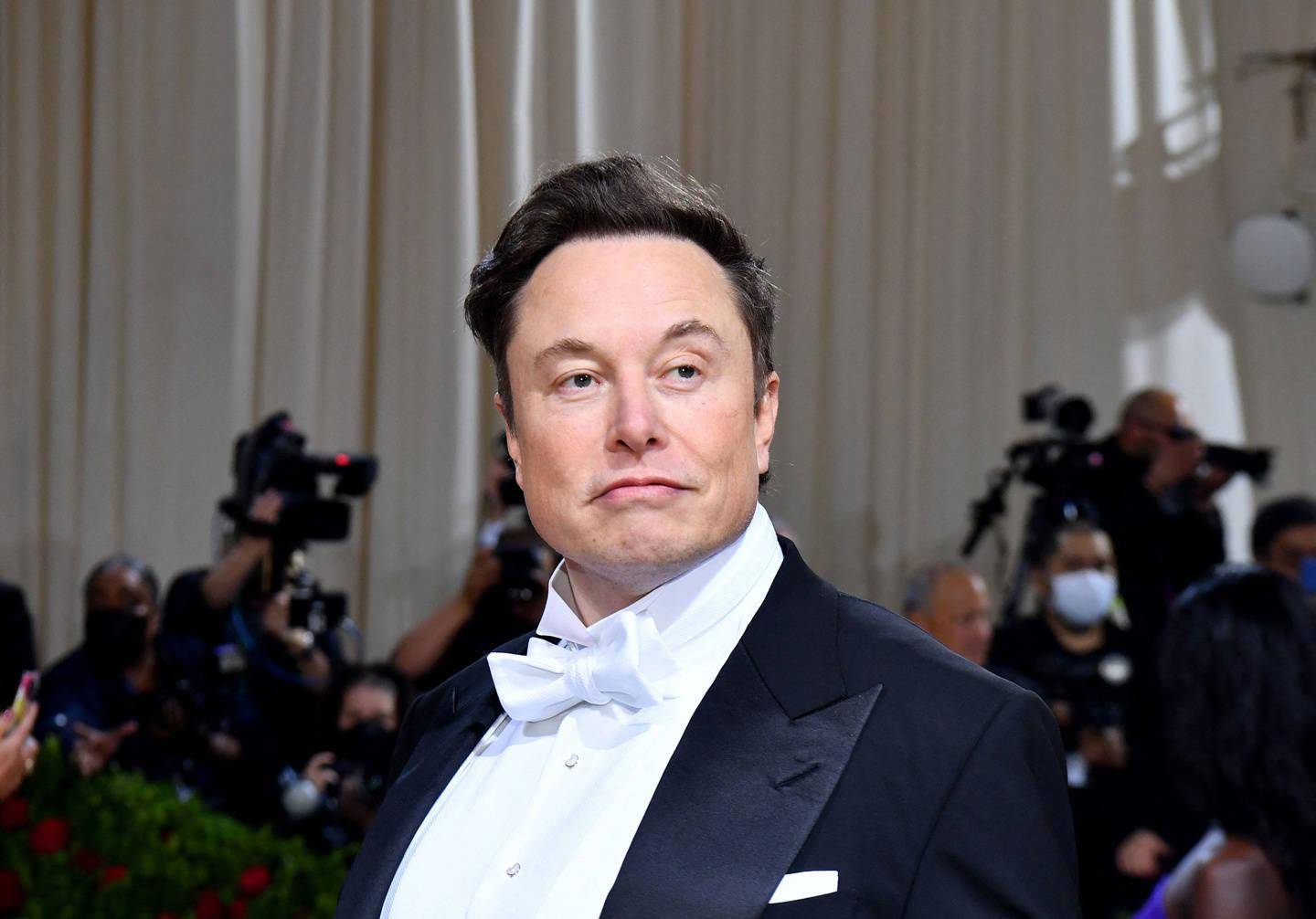